From ancient times, building house is one of life’s three big important things: buying buffalo, getting married, building house. With the concept has a good resident has good career innovation, that means stable accommodation then career is concerned; that the reasons why everyone tries to get their own house as particular property. The rural architecture of Vietnam houses is always synonymous with the village culture.

All houses are including the main house, the side (the horizontal, kitchen), barn, yard, garden, pond and fence, wall surround, gates. The main house is usually divided to parts by odd numbers (1, 3 or 5 part) and often turns to the south because of catching the sun when it’s cold and cool in the summer. Almost houses have semicircle or circle pond in front – follow the “Feng Shui” theory. The pond is not only a place to growing fishes, snails but also all the daily activities taken place such as washing clothes, washing vegetables, washing dishes… 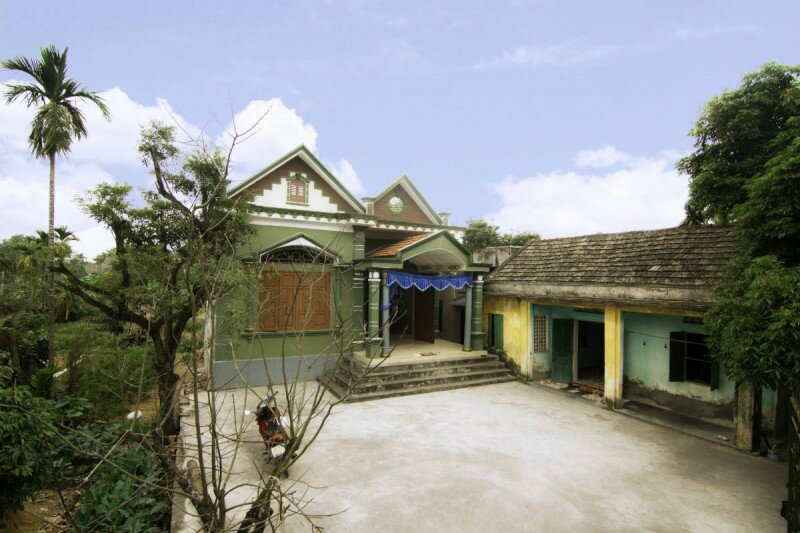 All houses have an ancestor altar. Ancestor worship beliefs – worshiping the death is very popular in Asia, especially in Southeast Asia nations and particularly in the Vietnamese and Chinese culture. For Vietnamese, it’s almost become a religion.

It is always a garden surrounded by areca row in front and banana at the behind; the house – the garden creating the village with its law as a unified community and life has existed for thousands of year’s history. Unlike the Western, Asian in general, and people in rural villages of Vietnam in particular tend to live three even four generations in the same house.In Vietnam village, it is easy to find items being made from things which are extremely familiar with normal life, such as: Areca fan; Coconut cup…

Each local house in Yen Duc village will provide you a nice experience to observe local life and family tradition, with a nice talking to warm hosts.

Throughout the history of Vietnam, the war went through and left many historical sites. From the forests, rivers, cities… to the villages, the historical evidence of a heroic nation have been stored. Yen Duc village like many other villages in Vietnam, has contributed to the history of country. In the village, Canh Mountain and “73” cave stand as the spirit of heroic battle against the invaders. “73” cave dates back to the heroic struggle of 73 guerrillas, who sacrificed all for the freedom of people. Vietnamese people love peace but are so strong in protecting country, fighting against any invader. In the trip to Yen Duc village, visitors will pass through Canh Mountain, see the historical “73” cave and listen to the villagers’ stories about village and people. Located in the Canh Mountain, “73” cave is the symbol of the local people’s courage and heroic sacrifices over the years. In order to honor the merits of the guerillas fighters and villagers, either a memorial monument or a grave were built here in 1980 to dedicate the heroic local people who died in the war.

Yen Duc village also have some other historical relics related to Tran dynasty and the historical Canh Huong pagoda in the center of village.

In rural Vietnam, pagoda is a source of culture, sacred places of worship, as well as location of the cultural activities. Visiting the pagoda brings you the tranquility of mind and a better understanding of Vietnamese traditional culture.

“Canh Huong” means beauty spot pagoda. The pagoda offers the visitor a chance to escape the busy streets and sample the atmosphere of rural Vietnam.

This is an ancient pagoda which was built under Tran dynasty (XIII-XIV century). The pagoda bears legendary stories of Vietnamese King Tran Nhan Tong leaving the court to follow a religious life. During his Buddhist life, he built a lot of pagodas near around this area. The pagoda has been destroyed and restored many times most substantially in 1664 a then again in the mid-19th century. However, these restorations retained the style of the original structure. Located in the center of the village, Canh Huong pagoda is a sacred place that every local villager comes to pray for the good health, good weather and safety and bumper crops.

Quan Ho folk song formed quite long ago by Viet people (Kinh people) in 49 Quan Ho villages and some other neighboring villages belong to Bac Giang and Bac Ninh province now created. Quan Ho singing is a Vietnamese folk music style characterized both by its antiphonal nature, with alternating groups of female and male singers issuing musical challenges and responses, and by the fact that most of the songs in the repertoire deal with topics of love and sentimentality experienced by young adults. 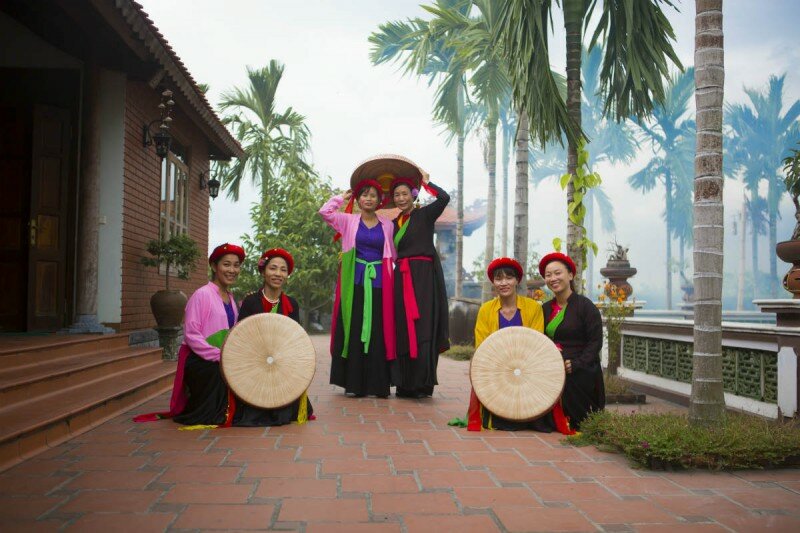 In Yen Duc village, Quan Ho folksong is a popular performance of villagers in the festivals, holiday or celebration day of village. The elders also organize the performance monthly as a cultural activity of the village. In the performance, people also present other folksongs as Cheo, dan ca… The cultural life of Yen Duc village is rich by contribution of all young and elderly villagers to preserve traditional culture and give lessons to children about love with the country, ancestor and family respecting.